The Godfather: Corleone’s Empire is a great mix of area control and worker placement which takes place in New York, with players shaking down businesses to pay tribute to The Don. Unlike many other CMON (Cool Mini Or Not) + Eric Lang games, the game was surprisingly not on Kickstarter, which makes it more readily available at your local gaming store.

The Godfather comes in a surprisingly large box! It features a great painting of Vito Corleone on the cover, which is also present on each edge of the box as well. 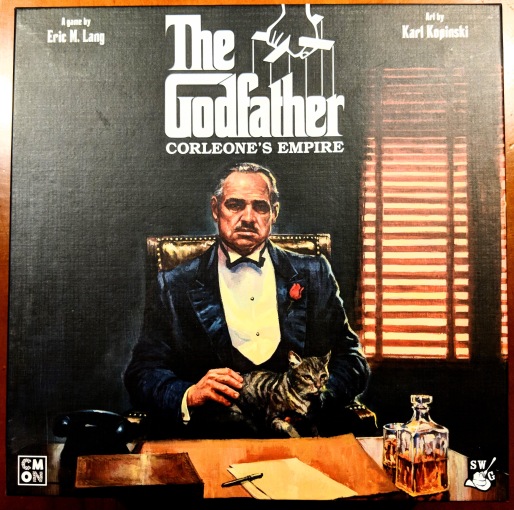 The back of the box features a large image showing the full set up game, as well some examples of the minis included in the game. There is a quote from Michael Corleone which helps set the tone of what the game will be about, as well as a more detailed description of what you will be doing throughout the game. I find some of the logos at the bottom quite distracting from the overall graphic design, but aside from that, the box is quite visually striking.

The rulebook features some stunning artwork, spread between clear and concise rules explanations and examples. The pages are a good quality gloss finish and it is easy to find what you are looking for with a table of contents provided in the front. 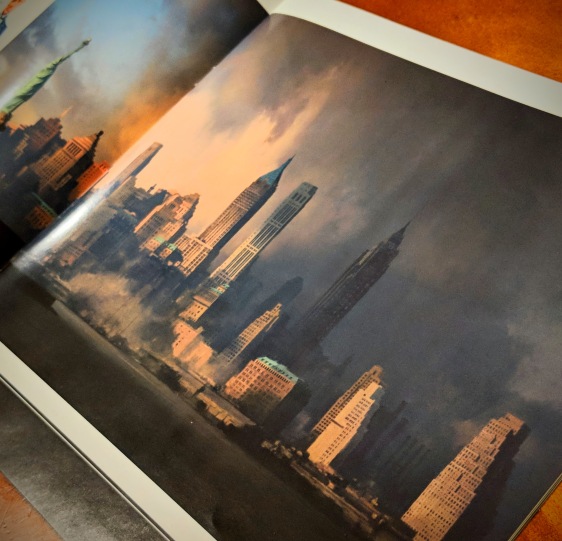 Wherever there is an explanation of a scenario, there is at least one example shown, if not more. This makes it really easy to learn and teach the game.  All of the text is broken up really nicely with either large examples or extra artwork, but not so much that it seems like the designers are wasting space. 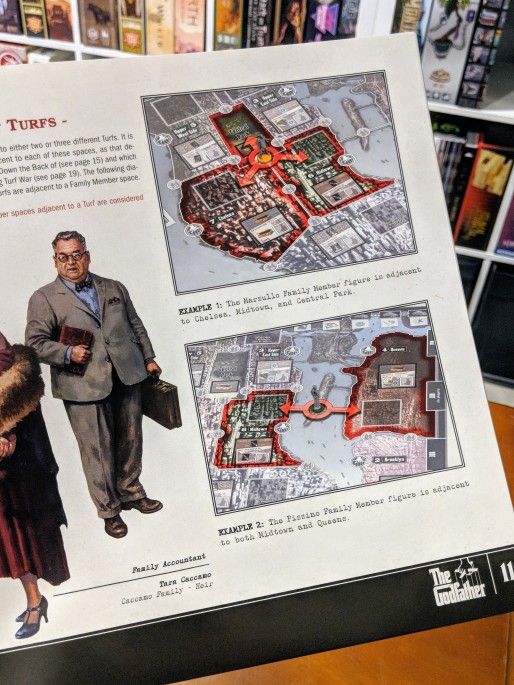 On the last page of the rulebook, there is rules summary which I think is always a useful inclusion. I like games which include either a back page dedicated to this, or a summary card for each player.

Upon opening The Godfather, you are greeted with no punchboards. There are no tokens, but the rest of the components are top quality as can be expected from any CMON game. There aren’t a lot of components required, which makes setting up the game quick. Each player receives a tin, their coloured player tokens, and the minis belonging to their player colour. 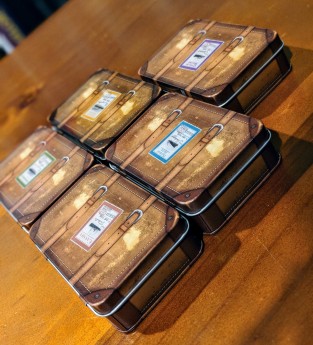 There are cards for the rest of the ‘goods’ including guns, liquor, and money. These are all secret within your hand, so all of the card backs are the same. I was confused at first as to why money would be on a regular card, but it’s for good reason. The tins are a really cool touch, personalised with different colours for each player.

The board shows New York City, which is split into different regions shown in different colours. Within each region, there are many ‘worker’ spots which link together with various benefits, making it tough to choose where you want to control. The colouring of the board is not over the top, and I like how the artwork is almost blurred as it means it isn’t too distracting. Bodies of dead players are placed into the Hudson River, adding to the overall theme of the game. I also like how there is a round tracker included on the board, which clearly outlines any extra benefits or actions that need to take place each round. 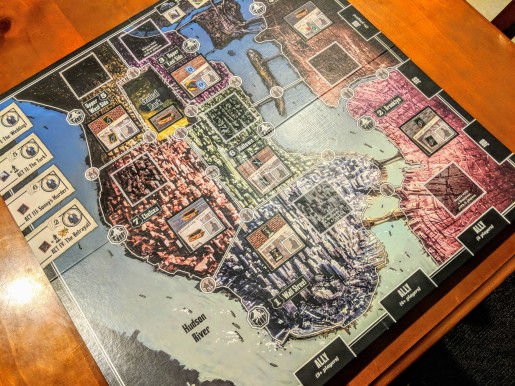 The game comes with a vacuform plastic insert which has plenty of space available – perhaps too much. All of the minis have their own tray with lid, which lifts out of the box and reveals more storage space. As I store the tokens within the tins, there is a lot of empty space which seems quite wasteful. Perhaps there is room for an expansion?

The Godfather should be available in most areas from your local gaming store and online, but I have noticed it isn’t as common as a lot of other games. If you do see it, I do recommend getting a copy as it is a surprisingly good game, and I don’t know how readily it will be available as time goes on.

The overall quality of this game is great, and I like the attention to detail. I can’t fault any of the components, just the size of the box perhaps. It is very large, and I think this could have been fixed by not spacing everything out so much in the box. The board is really striking, and I know many others have not been happy with the background art of New York, but I don’t think there is anything wrong with it. I feel it was a clear design choice to mute the background art a bit, making it less bold, to not distract from the shop spaces. I was hesitant to buy a game with movie licensing, but I think it has been really successfully transitioned into a board game. I do love worker placement games and this game is no exception.

View all posts by Beth