Last weekend I spent three days at PAX Australia in Melbourne! It was a fantastic time, and I spent a chunk of my time there checking out new and upcoming games in the tabletop exhibition area (newly released/close to production games), as well as in the PAX Collaboratory (under development games looking for play testers and feedback). I played several games and if you are keen to hear about them, keep reading and I will discuss the games I played and my thoughts on them. I didn’t play everything there (there was so much!) so I probably missed some great stuff, but here’s what I did get to experience:

Lets get into it!

Three Wise Monkeys is a team based party/educational game being developed by Darryl Browne of Hoot Hoot Grr Games. Darren was at the PAX Collaboratory showing off the game, and Meepleman and I sat down for a round of the game with him.

I was instantly drawn to this game as I love co-op games, party games, and dexterity games. We sat down to play a round with myself as the blind player, Meepleman as the deaf player, and Darryl providing instructions to him. I found it really entertaining to listen to the deaf player trying to figure out what the mute player was trying to communicate and then guide me to select the right blocks and place them in the right spots. I can see this game being very hectic and hilarious in a high pressure ‘race’. The game also serves an interesting role of allowing people with certain accessibility issues to participate. I’m very much looking forward to seeing it in the wild soon!

Drift Kings is a racing game being developed by James Allen. James was demoing his game in the PAX Collaboratory and was excited to announce that Good Games Publishing has picked up the game and is looking to publish it sometime soon! I played a round of Drift Kings (again with Meepleman) with James teaching. 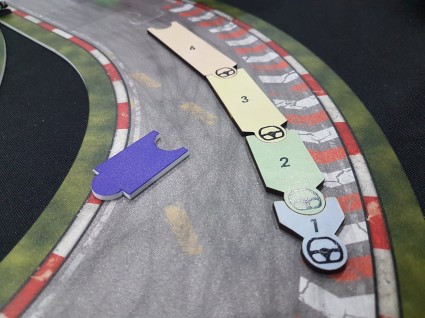 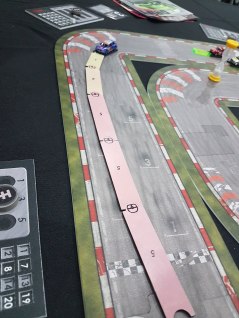 Zooming over the line! 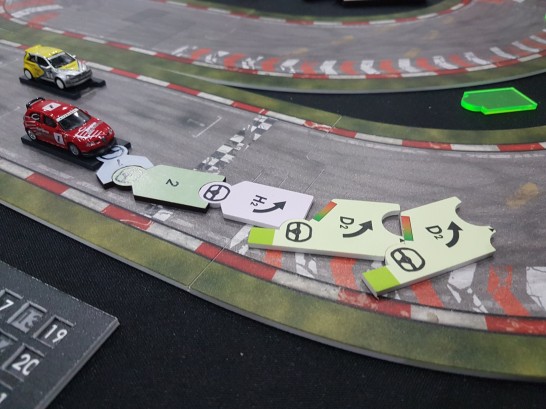 Drift Kings in played in turns and has a really nifty movement mechanic. Each turn, you are allowed to select 5 movement tiles of your choice, and you use them to lay out the path of movement for your car, following a few rules. Each tile represents a gear, and as such you can’t move from gear 1 to gear 5, you need to progress through them smoothly. Each tile pops into the previous one, and allows for some steering movement. You can see in the photos above that as you move up through the gears, the range of motion left and right decreases (as you would expect). There is also a very interesting drift mechanic that makes use of specially shaped drifting tiles.

Players take turns moving around the track, and earning drift points that can be spent on bonus actions until someone crosses the finish line. Moving around the track using these tiles just feels really awesome. I am blown away at the innovation of the design and really impressed at how well the game emulates actually driving a car, and the consequences of not planning well. I am very much looking forward to this game and think that this movement system should be franchised and everywhere!

You can check out and follow Drift Kings on its BoardGameGeek page.

This game seemed really cool but I’m not sure I came away from my chat with the developer knowing much about the game, and I’m struggling to find much information about it online. 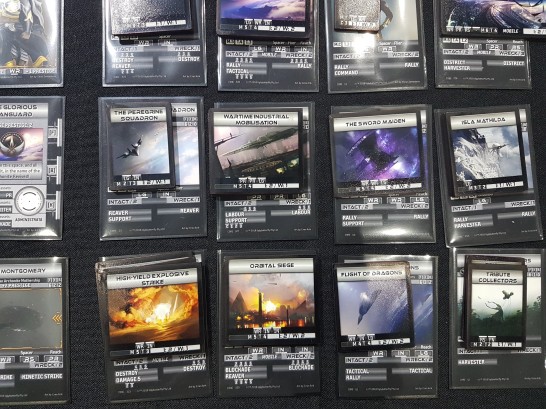 Lead developer of the game Emmett was very passionate and described the game as having several facets (economic, strategy, war etc) that are streamlined and brought together to create the game. There appears to be several versions with different factions available. He didn’t really seem interested in giving a demo of the game so I’m not sure what to think about this one. It looks cool, but I have no idea what it’s like to play.

I couldn’t really figure out more from the project’s website, but it has some nice art on display.

Reign Absolute is a interesting small box game that is sort of like hidden chess. The lead artist Aldrich taught me the game himself, and I was very impressed with the gameplay. 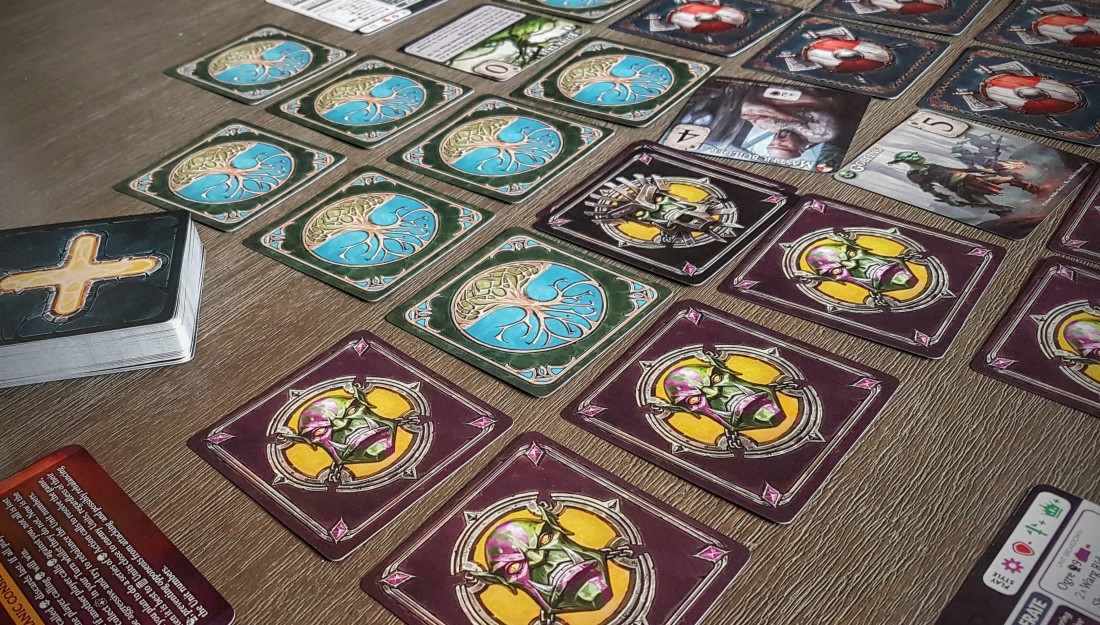 Each player controls a fantasy race (Elves, Orcs, Humans etc) and is given a set of cards comprising their units. All cards are played facedown to the table during the setup round. Then, on each player’s turn, you may move a unit or attack with a unit. Attacking is simple, with each unit having a numerical attack/defence value. You select one of your units (known, you can look at your cards at any time) and attack an adjacent (unknown) enemy unit. The cards are revealed, and the higher value one wins the battle.

The aim of the game is to eliminate all the other player’s kings. Last king standing wins. I find this game really interesting because it takes tactical strategy and combines it with bluffing. The idea that everyone’s units are hidden, but you can deduce and remember where they are is an interesting game mechanic. I look forward to seeing more of this game soon!

You can check out Reign Absolute at their website.

Delivery Duck is an upcoming title from indie publisher ClueJar. It’s not that hard to guess what the game is about! You’re a duck, who does deliveries! 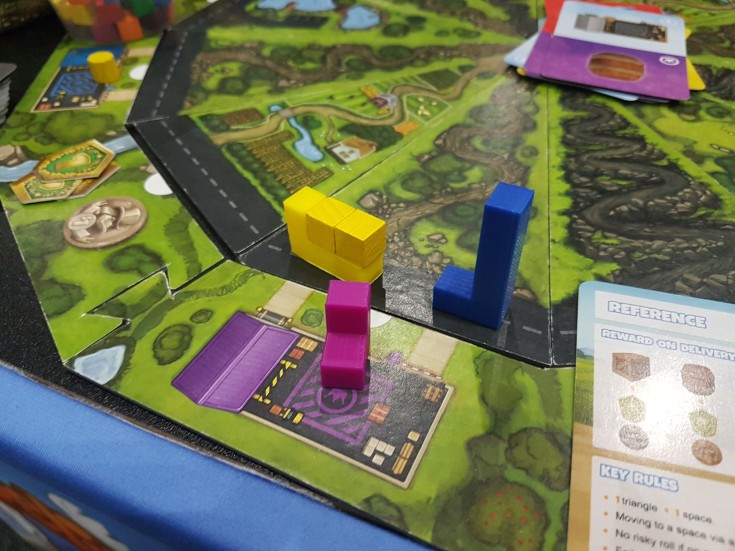 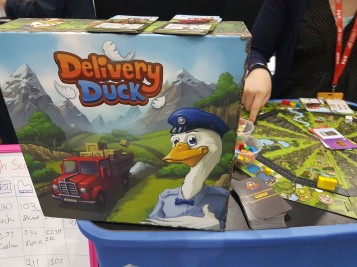 The world of Delivery Duck

Delivery Duck is a pick up and deliver game that combines a few elegant mechanics to produce a simple yet compelling game. At the beginning of the game and on subsequent turns, cargo will spawn (via cards) at the various coloured depots around the board. There are 6 depot colours with corresponding coloured cargo in three types – box, barrel and whale. Players pick up cargo with their trucks  and then use actions to move around the board to the destination depot, delivering the cargo for money and points.

Of course, whales are harder to deliver than barrels and are worth more points. Players can push their luck by attempting to take risky shortcuts through the middle of the board but they might lose their cargo on the way! Finally, players can get upgrades, trading in their original delivery truck for a higher capacity tractor, or even a catapult* that allows you to launch cargo it its destination.

I found the theme and gameplay of Delivery Duck really great and I’m very keen to play it again soon, I’m looking forward to its release. If you want to find out more about the game you can check out its website.

* I think that this vehicle is incorrectly named. It required a whale as a counterweight to operate, so it was clearly a trebuchet rather than a catapult.

Skyward Republic is an upcoming ‘expandalone’ (expansion that can be played on its own) from Rule and Make, designed by Brendan Evans. I was taught the game by Brendan. I found it very humorous that he was wearing a shirt that had his own name on it. 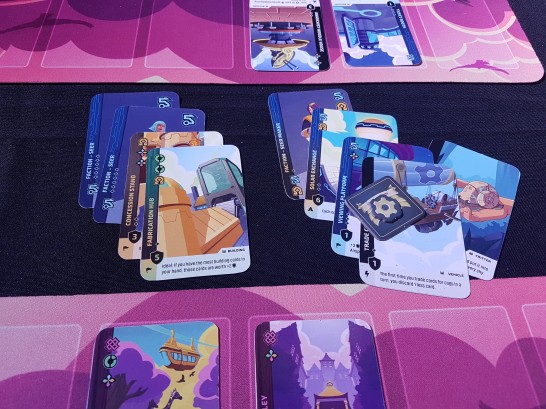 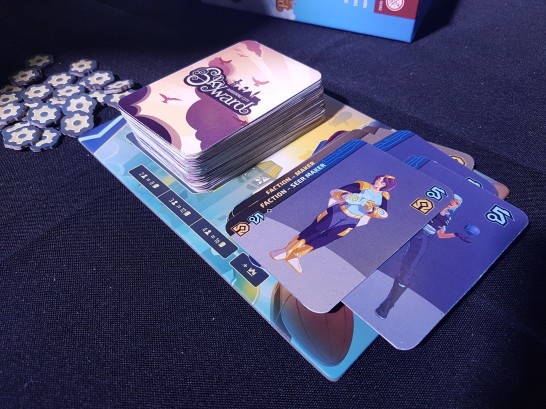 Skyward Republic shares the same base gameplay system as Skyward but adds and changes some mechanics. Players are competing to build the best airborne city! On each turn, the lead player (Warden) draws cards from the deck and is tasked with dividing them up into groups (an ‘I cut you choose’ style mechanic). Once they have divided the cards, the other player(s) select their stack and the Warden is left with the last pile. This system helps ensure the cards are divided fairly. Once this is done, each player may ‘launch’ one card by paying its cost and playing the card into their city.

The various building cards are worth points and some cards give bonus points for various conditions. Once a player has 6 buildings the game finishes and highest score wins. Skyward Republic adds a new mechanic in the form of ‘creatures’, which players are forced to play and have various negative effects. I really liked the simplicity of the game and can see how the modifications to the ‘I cut you choose’ mechanic in this new version will streamline the game. I’m keen to see it released!

Well, there we go. Lots of new (mostly Australian) games at PAXAus. I’m very interested in most of these and will be very happy to see them published and successful. Thanks for reading!